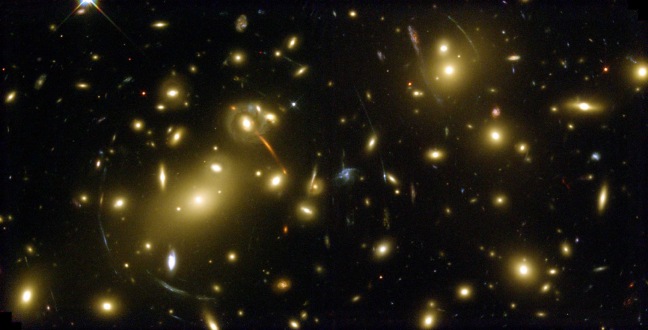 The night sky is literally full of stars, planets, galaxies, comets, asteroids, gas clouds, subatomic particles, photons, neutrons, moons and supernova remnants scattered in every direction. Despite the amount of visible matter that our own eyes and telescopes can pick up, this is only around 5% of the total matter in space. So where is the rest of it you ask? Another 27% of the cosmic inventory is taken up by Dark Matter. Of course, it being dark we cannot see it with our eyes or telescopes and it cannot be detected by any scientific instruments.

Dark Matter is very mysterious in the fact that it doesn’t emit any light nor does it interfere with any of the electromagnetic spectrum. We cannot see it, however we can see the effect dark matter has on other things that we can actually see. In plain English, this means that Dark Matter doesn’t really interact with other matter either as well as not being able to see it. The most accepted theory of Dark Matter is that it is full of WIMPs (Weakly Interacting Massive Particles). So all of the matter in space that could potentially be home to many billions of Jupiter sized planets living within astronomically huge galaxies, this still only accounts to 5% of matter. As stated previously Dark Matter has 5x this amount of matter within space. The massive particles which make up dark matter add up. If there is Dark Matter within every cubic centimetre of space, let me assure you, there are ALOT of cubic centimetres in space which all add up.

Mass accumulates and joins together in both visible matter and invisible matter. Look at how planets and galaxies form and take their place within the fabric of the cosmos. Dark Matter does exactly the same thing. In the early part of the 20th Century it was widely known and accepted that our universe was much bigger than we initially thought. What people saw in the night sky as stars were indeed stars in a lot of instances however a significant amount were very very distant galaxies which were mistaken as stars until they were properly observed. Upon this discovery, more and more physicists peered into the heart of the galaxies in order to ascertain the rotation and behaviour of the star clusters within. Given Isaac Newton’s age old laws of gravity, the highest gravitational pull comes from the centre of an object and decreases the further from the centre you go. So being scientifically presumptive at the time, it was easy to believe that the centre of the galaxy contained higher velocity stars whilst the outer suburbs of the galaxy contained slower ones.

Amazingly, when an astrophysicist named Vera Rubin looked at these galaxies, stars and motions of stars were uniform at the outer edges of the galaxy as they were nearer the centre. It shows observational evidence that the level of gravity did not decrease with distance from the centre of the galaxy. This has been observed in many other galaxies including our own. The Dark Matter accumulated has a gravitational effect which doesn’t slow stars down. This evidence is consistent as the lack of decrease further from the centre of the galaxy has to signify something.

Will we ever find Dark Matter and study it.? From astrophysics and astronomy circles, nobody really knows but the cosmic microwave background also gives some clues as to what Dark Matter is. Fluctuations in different peaks of this background radiation can show the effect from regular matter and other patches of left over radiation which is affected by “nothing” (ahem…Dark Matter).

So there is definitive proof that Dark Matter does indeed exist despite not knowing what it is. The best analogy I can think of is carbon monoxide. It is an odourless, colourless and tasteless gas yet the effect is has on humans if we inhale it can be extremely deadly and without warning. Physicists also believe Dark Matter can be composed of Axions which are theoretical particles which are based in theories of Quantum Mechanics- the theory and study of the very tiny particles and tiny details of the cosmos which can affect the largest of structures and scales. Einstein’s Relativity deals with the astronomically large whilst quantum mechanics deals with the infinitely tiny. There isn’t universal agreement to tie these theories together and we are without a Theory of Everything, which would combine the two. So Dark Matter certainly isn’t in the same categories as fairies and unicorns despite not being able to see it, ultimately the effect it has on other things shows us that it is there and has a huge effect on galaxies all around the universe.

So we have discussed visible matter – 5% and Dark Matter 27 % so where is the other 68%? Time will literally tell….

Brought to you by Jude Morrow. Edited by Amy King.