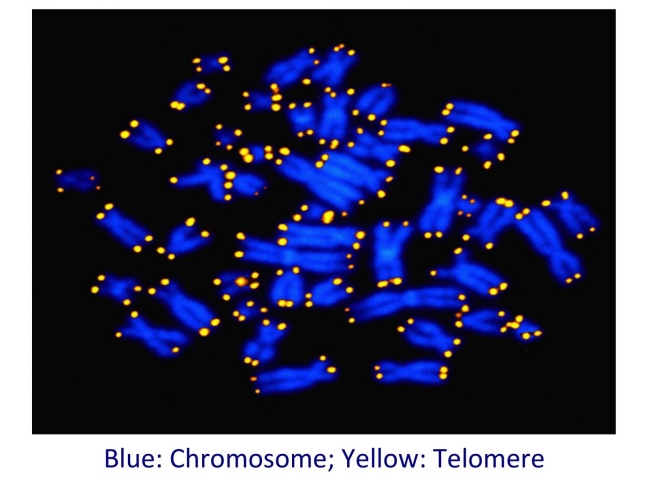 Telomeres are caps at the end of our chromosomes that protect our DNA from damage. They are made up of the same short DNA sequence repeated over and over again, with the same sequence of bases. They are important for a cells because without them chromosomes would stick together and would not divide properly during cell division. Therefore, telomeres are significant for our health as they ensure cell division occurs without damaging DNA for growth and repair of cells.

However, telomeres shorten during each cell division. This is because of the ‘end replication problem’. The problem is the incomplete replication of the DNA at the end of the chromosomes by DNA polymerases (the enzymes that are responsible for catalysing the formation of phosphodiester bonds between DNA monomer nucleotides). The polymerases do not work at the end of the chromosome which leads to a shortening of it over time. Eventually, this shortening will reach a limit, meaning the cell can no longer undergo cell division which is known as the Hayflick Limit. The cells will become senescent and die through apoptosis leading to ageing over time.

Is there a way to stop this process?

There are certain ‘immortal’ organisms called Tetrahymena which maintain their telomere length. From studying these organisms, scientists have discovered that they have high levels of an enzyme called telomerase which prevents this ‘end replication problem’. The telomerase enzyme has its own RNA template which lines up against the DNA during replication for the addition of more bases to the strand. With more base sequences, the chromosome length increases and reduces ageing of the cell.

However, telomerase has some disadvantages. There is a higher risk of uncontrolled cell division in telomerase active cells which has led to the formation of some types of cancer tumours. Although, there is also a high risk of the development of cancer cells with short telomeres.

Telomerase has not given many answers to how we can make humans ‘immortal’ (if we even wanted to do that!). However, scientists have also found that long term and intense levels of stress has led to shorter telomeres and lower levels of telomerase. High levels of stress result in the production of a hormone called cortisol which reduces the presence of telomerase. Therefore, people that have experienced violence, bullying or other stress inducers will usually have a longer disease span and shorter health span. If we can reduce levels of stress, we may also be able to elongate our lives and reduce ageing!

One thought on “Telomeres and why we age.”