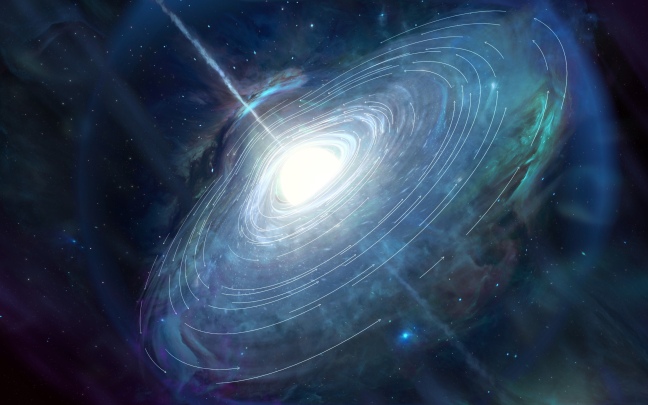 My latest two blog posts regarding surface water on Mars and Titan seem to have generated an influx of questions. When researching material for blog series’, the questions and comments seem to give inspiration for future posts. One such comment mentioned a large reservoir of water located at a proper distance of 12 billion light years from Earth.

I can admit (sometimes) that there are some discoveries that pass my watchful eye and this was certainly one of them. The California Institute of Technology or “Caltech” were conducting an observational study of very distant quasars, and found a large body of water that contains at least 140 trillion times more water vapour than all the world’s oceans combined.

The discovery was made in 2011 and I have to admit that one passed me by! It didn’t seem to gain a lot of press coverage in proportion to the significance of the discovery.

Quasars themselves are among the brightest and most violent objects in the cosmos, emitting astronomical amounts of energy.

This quasar in particular being 12 billion light years from our telescope lenses, shows us the cosmos as it was 12 billion years ago. The light emitted from the quasar to show the reservoir has travelled a 12 billion year journey in order for us to see it.

So why is this important? That is an unbelievable body of water, in the very early universe. When looking at these images, we see the universe as it was in its infancy of 1.6 billion years old. In the early days of the universe, massive bodies of water clearly existed. To give another idea of its size, the reservoir itself is approximately 100,000 times more massive that our own sun!

Quasars emit huge amount of energy and light among all frequencies so that equates to heat. The energy of the quasar is preventing this body of water from becoming a large icy boulder. At 100,000 times more massive than the sun, it would become a spherical icy object in deep space. Although this hasn’t happened.

Given this is such a huge body of water, it is fair to assume that this water was eventually dispersed or even frozen over time. As the early universe expanded, did it take a large portion of this water with it to fuel life in other worlds around the cosmos?