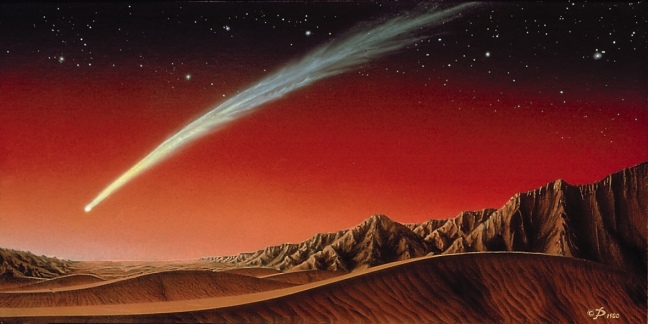 First of all, allow me to apologise for the extended break I’ve had from writing. I have been reading and working behind the scenes to gain enough content to keep us going into the new year.

From reading subscriber comments and questions, one topic I haven’t really touched upon in any great detail is water that lies outside of the Earth.

It seems to be a widespread misconception that where there is water, there is life. That’s absolutely true here on Earth, further afield not so much. Water certainly helps, but isn’t the only ingredient necessary to generate or sustain life.

Other factors such as surface temperature, atmospheric conditions and weather cycles all come together for a planet, like ours, to harbour life.

It has been known that Mars contains water for a long time. From early observations of Mars with primitive telescopes, water ice at both the north and South Pole of Mars have been noted. Of course many thought at the time that Mars could harbour life like ours because nobody could measure its weak and thready atmosphere or its internal temperature.

The atmosphere of Mars has withered away quite slowly over the aeons, in turn causing the free flowing water on the Martian surface to freeze quite quickly or evaporate quickly. So at one stage Mars had higher atmospheric density so surface temperatures most certainly allowed larger bodies of water to exist on its surface.

Evidence of liquid water has been found in samples taken by several Mars lander robots over the decades although more signs of life existing or having existed before are becoming more and more tricky to scientifically prove.

Recently NASA have found various glacier areas and it’s easy to theorise that Mars had Ice Ages quite similar to ours given the variety of terrain explored on the surface.

In your humble scribes point of view, Mars should have all the evidence that life once existed there but the most advanced of technology cannot seem to find definitive proof of it. It just seems like somewhat of a disappointment which breathes life into various theories that NASA don’t reveal as much information as it seems.

Water has been found in many other celestial bodies; planets, meteors, asteroids, comets and dwarf planets. This series will give insight into what we currently know about the origins, and the next steps into exploring what they mean for life coming to our own planet.