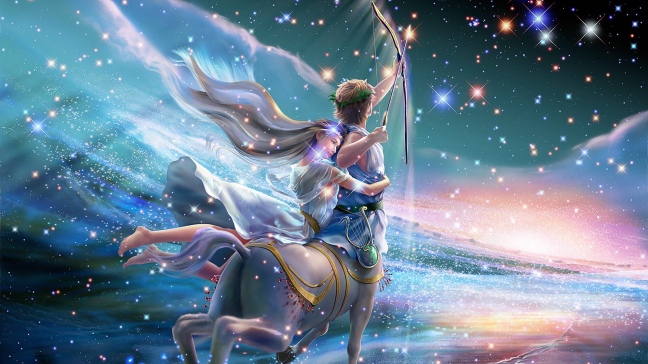 Sagittarius lies at the centre of the galaxy and is represented in mythology as a Centaur pulling back a bow. From the northern hemisphere, the brighter stars are easily recognised from an asterism known as the teapot.

The brightest star in Sagittarius is Epsilon, a rapidly spinning binary star. At 143 light years from us, it is 363 times brighter than our sun with 3.5 times it’s mass. Near Epsilon is a large mass of dust that could be planetary but quite difficult to tell due to the luminosity of the star dwarfing the cloud.

Rukbat, meaning “archers knee”, is probably the best known. Strange as that is because it is so dim and I’ve only ever been able to see it through a telescope. It is more than double the sun’s temperature and nearly three times as large.

The hole itself is so hard to see given the high stellar density at the centre of the galaxy but the effect it has on the stars surrounding it proves beyond doubt its existence.

There’s another galaxy just outside the Milky Way, the Sagittarius Dwarf Eliptical Galaxy. The galaxy itself is quite small and acts as a satellite galaxy to our own much larger Milky Way.

As far as exploration goes, the New Horizons probe that photographed Pluto is on a trajectory towards Sagittarius but it’s onboard fuel system will have long exhausted before it reaches any stars. The nearest to us in Sagittarius in 85 light years away so it could take hundreds of thousands of years to reach it.

The most interesting story from Sagittarius is the Wow! Signal. This was a short radio burst from the direction of the constellation to which there still isn’t an answer for its origin. Perhaps an attempt from intelligent life to contact us or a short radioactive burst from an unknown object. Who knows?