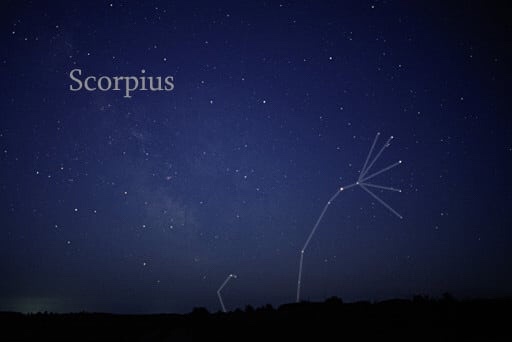 Scorpius, more commonly known as Scorpio in astrology, lies between Libra and Sagittarius on the Sun’s journey of the ecliptic. Although the constellation is seldom called Scorpius officially, it is the correct name. The sun is only within the bounds of Scorpius for 6 days from November the 23rd until the 28th.

Scorpius is Latin for scorpion and has been observed since the 2nd century making it one of the ancient constellations. Sadly, I haven’t had the pleasure of observing it as it lies in the Southern Hemisphere.

In mythology, Orion pledged to kill every animal on the Earth and was killed by a scorpion sting. Given this victory Zeus elevated the scorpion to heavenly status. Also immortalised in the stars was Orion, as a reminder for us humans to curb our excessive pride.

As far as the constellation itself goes, it contains tons of deep sky objects. A question raised was what the term deep sky objects means, when I say this it denotes objects at impossible distances from Earth up in the tens of thousands of light years from us. Massive supergalactic structures can often be confused for smaller nearby ones to the naked eye.

Scorpius’ brightest star is Antares, the 15th brightest star in the sky and often called The Heart of The Scorpion. Antares is a supergiant star and most likely among the largest there is to find. Antares doesn’t have any confirmed planets.

The next brightest star is Sigma. Incredibly difficult to observe as it is so outshone by Antares. To find planets orbiting this star is going to be extremely difficult due to its incredibly bright neighbour. The dips in star light will be so hard to measure as it will be mostly compensated by Antares.

Tau Scorpii is 15 times larger than our sun and over 18,000 times brighter giving it a surface temperature of over 31000 Kelvin. Tau is blue in colour and in most cases the blues are hotter than the reds.

Along with the many star clusters inside Scorpius it contains a bipolar planetary Nebula. In short, an already exploded massive star has emitted dust and debris which is collapsing to form smaller stars and planets.