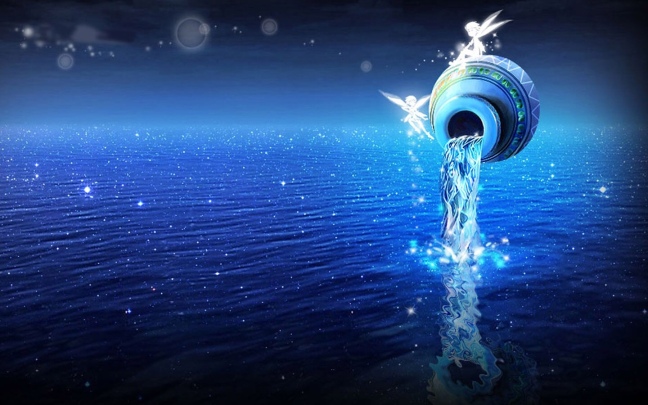 The Water Carrier Aquarius is one of the oldest known constellations. In the 2nd century 48 were observed and noted by Ptolemy although with modern telescopes there are now a total of 88.

Aquarius is located in a region of the sky we call “The Sea” because its neighbouring constellations are; Cetus the whale, Pieces the fish and Eridanus the river.

Aquarius would have had negative connotations in Ancient times. The ancient Egyptians associated Aquarius with the Flooding Of The Nile and the Babylonians also believed Aquarius was the bringer of destructive floods, pouring his vase into the rivers.

Despite its large size and visibility to the naked eye, Aquarius doesn’t have many bright stars. The two largest stars are Alpha and Beta Aquarii, both yellow supergiants. Both are over 500 light years away. Alpha Aquarii in particular has 77 times the radius of our sun and 6.5 times its mass. It’s huge!

Beta Aquarii is the brightest star in Aquarius and 2200 times more luminous than our sun. In size it is slightly more modest than Alpha Aquarii being only 50 times the radius of the sun. Over this series you will probably find how small and dim our Sun is compared to others.

So we see them both from Earth as they appeared 500 years ago as that is how long it takes the light emitted from these stars to reach our eyes.

Some of the stars within Aquarius also have planets orbiting them! Planetary systems around stars is incredibly exiting as certain planets orbiting these stars are at a safe distance to support liquid water on their surface. What we call the Habitable Zone.

One such star, Gliese 876 at a distance of 15 light years away, has 4 planets orbiting. Including one terrestrial planet 6.6 times the mass of Earth. Of the four planets their orbital periods are quite different ranging from 2 days to 124 days. If you look at this star from a telescope you can see a planet pass in front of it every 2 days.

Given it’s close proximity to the star it orbits, I can’t imagine any life on it. It would be difficult for Jools Holland to have a Hootenany every two days! A two day year!

Another star in Aquarius, Gliese 849b has a gas giant Jupiter-like planet orbiting it. This planet’s year is much longer at 1852 days. These orbits are measured by how often the planet passes in front of the face of the star we can see.

Aquarius has plenty of deep sky objects aswell. Messier 2, Messier 72 and Messier 73 are massive collections of stars called Globular Clusters. Messier 2 in particular is 37500 light years from us and 175 light years in diameter. It contains around 150,000 stars and one of the largest known clusters.

So what we can see as dots in the sky are not individual stars but massive groups that are very far away and easily mistaken as being one nearby star with the naked eye.

Some meteor showers have been observed from Aquarius as well as planetary nebulae, massive clouds of dust and plasma that collapse to form stars. Inside Aquarius new stars are being made!