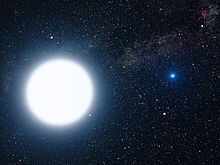 To the naked eye Sirius is a single star but through the telescope it is a binary system, two stars orbiting one another. Sirius A is a main sequence Star like our sun and Sirius B is a faint white dwarf as it’s orbital companion.

Sirius is so bright as it is one of our near neighbours at 2.6 parsecs or 8.6 light years from Earth. Sirius is gradually moving closer to our Solar system and will get increasingly brighter over the next 60,000 years. For at least 200,000 years, Sirius will continue to be the brightest star in our sky.

Sirius is twice as massive as our sun but 25 times brighter. Sirius is significantly dimmer than both Canopus and Rigel which are much further away at 309 and 863 light years away respectively.

Sirius A and B were once a pair of bright blue stars and the system is around 300 million years old. Sirius B grew into a red giant much more quickly and collapsed into a white dwarf approximately 120 million years ago.

Another name for Sirius is “The Dog Star” given is prominence in the constellation Canis Majoris also known as the Greater Dog. The star was known in ancient times, how can one not observe and record the brightest star in the sky.

The Ancient Greeks actually believed the power of this Star would bring hot summers, cause plants to die, men to weaken and women to become aroused. Most stars, planets and galaxies in the Sky were believed to have an effect on the human spirit in ancient times . These notions are the origins of the pseudoscience Astrology.

Although the Star Sail project is keen to travel to our nearest stars are Alpha and Proxima Centauri using their starlight and lasers to power nanocraft, Sirius is also a viable option due its intrinsic brightness. The light of the star can maintain the craft in its travel and cause it to brake aswell.

Through a telescope it glitters and sparkles and well worth a look even with binoculars. It is easy to find aswell, just look for the brightest one.